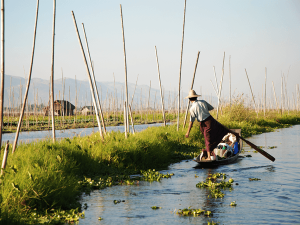 In 2020, agriculture has moved farther from the traditional farm and closer to the table.

For 11,000 years, farming was confined to the field, with the notable exceptions of Babylonian hanging gardens and Aztec floating gardens.[1] Then, by the 15th century, plants were being grown in controlled enclosures and, four centuries later, in greenhouses.[2]

Hydroponics, the practice of growing plants in a nutrient-rich mineral solution instead of soil, has existed for centuries but was refined and made popular in the early 20th century.[3] 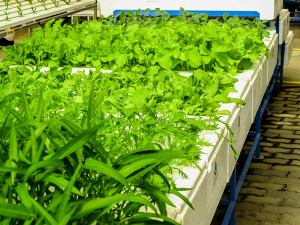 By 2018, the global hydroponics market totaled $1.33 billion. From there, continued expansion is expected at 22.52% per year.[4] Recent technology advancements should make that rate possible:

With 21st century improvements in watering and a computer-monitored supply of nutrients, hydroponic systems now achieve higher yields. That greater harvest is safer to the public. Hydroponics removes any risk of disease from soil-borne organisms.

The U.N. Food and Agriculture Organization anticipates that by 2050, a world population of 9.1 billion will need more food sources. Arable land in Asian Pacific and European regions will become especially scarce.

Hydroponics will help to resolve that need in many ways.

Land disputes have caused more than 175,000 people to find protection and food assistance in Algerian refugee camps. Frequent sandstorms and temperatures exceed 122 degrees have led to chronic malnutrition. To address this, charities that have distributed food for decades now have strategies that will provide milk, meat, and income to refugees.

Barley is being grown in the Sahara, protected only by greenhouses constructed from adobe or from recycled shipping containers. There, sprouts are set within tubs, where they are watered using solar-powered pumps. Each greenhouse yields about 132 pounds of barley grass per day: enough to feed 20 goats, each essential to sustaining the refugee community.[5]

A similar program at a refugee camp in Sudan supplements food assistance to more than 28,000 people. The goal of that hydroponics project is to feed goats that will provide milk for children.[6]

The temperate climate in the United States creates economic challenges. Long mileage from farm-to-kitchen brings transport costs and spoilage expense to the balance sheet. Seeing this, businesses are investing in hydroponics.

A Michigan foodservice company has installed computer-controlled hydroponics at its headquarters, bringing a year-round yield of herbs and produce. Indoor farming is taking hold in cold weather areas from Pennsylvania to Brooklyn, N.Y.[7]

In a much-warmer region, Central Florida, Kalera Inc. is constructing the first of its HyCube™ growing centers. These vertical hydroponic farms will provide greens for hospitality, grocery, and foodservice industries. A significant advantage to restaurants at the Orlando World Center Marriott is the facility’s onsite location. The expense and energy waste of shipping perishable products long distances will be eliminated as farm-fresh produce is brought directly to kitchens.

A closed-loop irrigation system will also reduce water waste, using 95% less than the field-grown produce would require. With this efficiency, fresh, highly nutritious vegetables can be grown without pesticides, hormones, or GMOs and will be available for harvest year-round.[8] 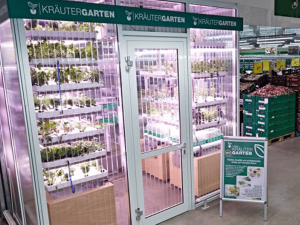 An international research firm reported that by 2018, 21% of consumers were eating locally grown products at least twice weekly. A full 95% found added value in those products.[9]

Local retailers can meet some of that demand by growing produce in, around, and above their stores. A Louisiana grocer has cultivated vegetables in an aeroponic rooftop garden. In Iowa, hydroponic “grow walls” inside and outside a supermarket yield a 15-pound weekly harvest of lettuce, basil, and mint.[10] A German company manufactures self-contained hydroponic farms, now installed in Washington state and over 250 European locations.[11]

As explorers head to Mars and beyond, hydroponic plants are likely to travel with them. 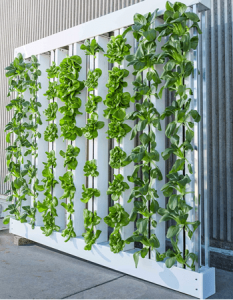 Today’s hydroponics extends farming beyond the fields to places where plant cultivation had never been thought possible. Green walls and vertical growing systems like the Kalera HyCube bring farming into the third dimension. Well-planned and monitored irrigation systems boost nutritional value without genetic modification. The better appearance and taste of hydroponic produce can be verified first hand by consumers and businesses locally, in any climate, year-round.

The smart steps forward of hydroponics have redefined the farm.