I honestly think that I have found the secret to happiness and I want to share it with you. 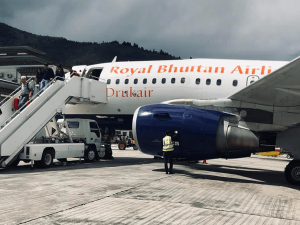 I just returned from Bhutan which is a tiny Buddhist Kingdom in the Himalayan mountains. Bhutan is nestled between India in the South and China in the North. With a population of 850,000 people, that’s smaller than Orlando. It is a country that is unlike any I’ve ever visited.
As soon as we got off the plane in Bhutan, I felt that I had arrived in an alternative universe.

As a result of the percentage of tree cover and their use of hydro-electric power, Bhutan is carbon negative, meaning they absorb more carbon emissions than they produce. Beyond the environment, Bhutan is the first country in the world to adopt Gross National Happiness as the primary measurement of success.

Bhutan introduced the Gross National Happiness concept in 1972 to a chorus of international snickering but the philosophy has prevailed. As of 2011, the United Nations began publishing an annual Happiness Report which rates all UN member countries.

What I’ve told you so far is background. Here is what I identified in my quest to find the secret to happiness. After 21 days that included cultural lessons, visits to villages, schools, homes, temples and markets, two primary characteristics stood out as contributing to the happiness quotient:

1 — Simplicity of life
2 — Lack of individualism 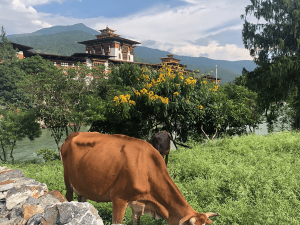 Bhutan feels like a place where time stood still. It has never been invaded or colonized.

The Bhutanese monarchy, like protective parents, kept Bhutan free from western influence until 1974, when it opened its doors to tourism. Even then, the way of life continues to be protected:

Bhutan is refreshingly void of some of the most familiar sights your eyes are drawn to when you visit a new country.

This limited exposure creates a simplicity of life, there is no yearning for things western or high tech. This feel of satisfaction lends itself to a more peaceful pace. Every house has a temple and every person takes some time to mediate daily.

Bhutan has had democratic elections since 2011, but they have carefully leveled the playing field.

The Government provides $5,000 to each candidate. That is the limit of money allowed to be used.

Another way that Bhutan reduces emphasis on the individual is the traditional Bhutanese dress. This “Bhutanese uniform” is required for all citizens. Children are required to wear it at school all adults must wear it at work, social gatherings and temples.

Traditional dress is a robe hand made of a with a specific Bhutanese pattern. Women wear the same material as long skirt with a closed silk jacket.

The king and the queen wear the same dress as the citizens. The dress code of Bhutan was introduced in the 17th century to reinforce uniformity. It is regal and scholarly.

In Bhutan, a person’s name is not a significant identifier. It doesn’t identify a person’s ethnic heritage or lineage as it can in the U.S. In fact, Bhutanese people do not have last names. They are given two names a birth and there are only 50 names, all gender-neutral, to choose from.

So imagine this, you’re running for office and you have the same amount of money, same outfit and the same name.

To western ears, that could sound a bit Orwellian. We are trained to strive for individual success. We’ve got to count on ourselves, the ideas of suppressing our individuality (eg. A mandatory dress code might sound repressive, and maybe it is).

I returned from the trip with a firm desire to distill and retain a small piece of wisdom. This is what I hope to share with you:

With a little bit of social intervention, a lot more happiness is available to us. Today I ask you to let your thoughts slow down and observe the world with naked eyes. Remove you biases and your assumptions, suspend your judgment and simply see. Then just allow your mind to consider changes we could experiment with to improve our system.

May happiness be with you all!